Munindra Misra, an Indian writer, has authored over 108 publications. His inimitable works in English rhyme on Hinduism and Hindu culture, provides a lucid understanding of the Sanatan Dharma. He has dived deep into the basic concepts of Sanatan Dharma, illuminating various scriptures and probing into their inner meaning. His unique and rare works are path breaking, grasping the true depths of Hinduism, never so exhaustively written in English rhyme previously and enhance their glow for the English readers. Munindra Misra has been honoured with a badge and awarded
“Top Viewed Author"
by Knol – A unit of knowledge of Google in 2011.

Munindra Misra was born (16th June 1952, Allahabad) into a family primarily in the legal profession. His grandfather, Pt. Baij Nath Misra, was a famed advocate, his father, Pt. Kanhaiya Lal Misra, an advocate, who represented the Government of Uttar Pradesh, India as the Advocate General (1952-69) for over 17 years.
Munindra Misra is the youngest of his brothers & sisters. His primary education was from Welham Boys’ School and thereafter he completed his Senior Cambridge/ I.S.C. from The Doon School in Dehra Dun. Subsequent to his graduation, and management (ICS) he joint the Banking Sector as the Development Officer, Andhra Bank. However he resigned within a few years and took over as Assistant General Manager Omni, India.
Thereafter he started his own consultancy
(a) The Computus: software development, Desk Top Publication & Data Processing.
(b) CTEC (Computer Training & Education Center): for financially weaker section of society.
He currently resides in Gurgaon, India - totally engrossed and dedicating his life to authoring and creating works in English rhyme on the Sanatan Dharma and its way of life.

Misra has over 108 published books and eBooks. He writings are unique and rare, and his style of work, on Hinduism (Sanatan Dharma), is in English rhyme. This has not been done so exhaustively by any individual.
His works include Chalisa, Stuti, Stotra, Upanishad, Gita, Yoga, Mahabharat, Ramayan, Mahatma Vidur, Chanakya, The Panchtantra, works on Kabir in English rhyme and a few poetry publications.

‘Knol’ – a unit of knowledge of Google, has honoured Munindra Misra with a badge and awarded “Top Viewed Author Award” in 2011

Munindra Misra is the youngest of the 5 sons (Sarva Sri Vijay Prakash Misra, Ravindra Prakash Misra, Justice Ajay Prakash Misra, Ranjan Misra and Munindra Misra) and 3 daughters (Shanti, Jyoti, Priti) of Pt. Kanhaiya Lal Misra, a renowned legal luminary of India. Born in 1952, he lost his mother at the tender age of 17 and his father when he was 22 years old. He is married to Smt Neerja Mishra and has two sons - Akshay & Anubhav 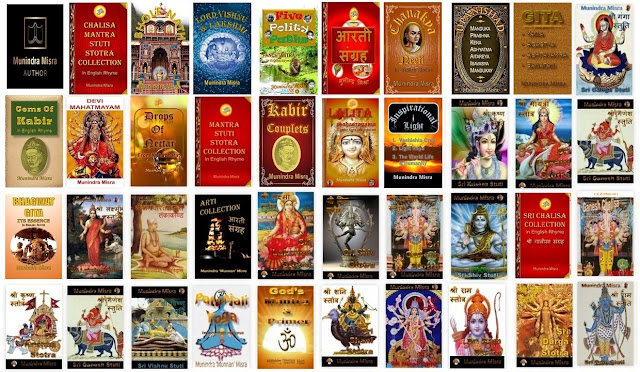 Munindra Misra
An Indian writer, having over 108 publications. His inimitable, unique works on Hinduism are written in English rhyme.